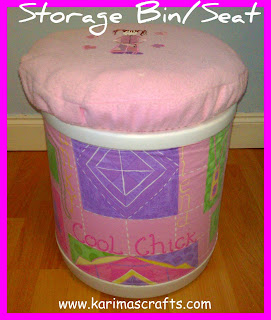 Above is a photograph of the plastic storage bin/seat that I recently did a makeover on.

Unfortunately I didn't take a photograph of the the bin before I updated it.  The body of the bin originally had an old fashioned sticky back plastic on it. This bin has been in the family for many years, maybe even as old as me, because I remember sitting on it when I was young. This belonged to my grandmother who had no space for it, so gave it to me.

I thought this would be really handy in the girls' room. They keep all their bags in this and it is great as it doubles as a seat!

To transform this I cut out some spare fabric (pink of course!). I glued the fabric to the bin using general household glue.  Then I made a new cover for the lid.  The lid already had a cover but it was really worn and dated.  I used the original cover to make a pattern for the new cover.  The new cover was made from a cushion cover that my daughter already had but didn't use.  I also cut out a circle of foam to place between the cover and the lid to make the seat more comfy! 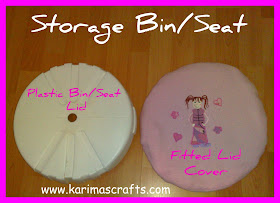 The photo above shows the white plastic lid with the fitted cushion cover I made beside it. 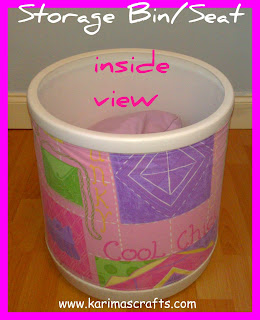 This photo shows you the inside of the bin where my daughters now keep their collection of bags.

This bin would have probably been thrown out because it was so dated, but with a little love it now looks brand new!